It is key to his move. My father was a World War II navigator shot down in Poland and transferred to Stalag-VII-A Moosburg Bavaria.  He returned home a broken man with PTSD, never took a bus, drove, or flew on a plane again. His disability, like so many vets was untreated for 50 years. He worked as an advertising agent ala Mad Men and drank like Don Draper. Our family crumbled into a dysfunctional maelstrom, as most families do.

Finally, after my mother died, I talked him into going to the VA where he did get treatment through the GRECC program. My brother who lived with him died, my Dad found his body and the house caught fire, I then moved my Dad out to a board and care 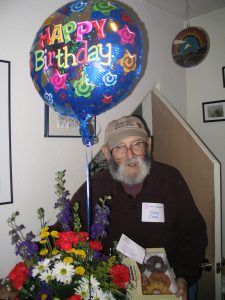 and had the house rebuilt. However, it was Edgar Alan Poe’s House of Usher. The perfect storm of 91 flooded the whole house again just like Hurricane Sandy. We lived on the bay off the Jersey Coast, since devastated by the rising ocean.

On Christmas Eve I got him an emergency flight to California with only his clothes and he moved in with us for 20 years, until his death. Was it a good move-?

We compensated by moving into our attic, which, had been renovated with a bedroom, bath office, etc. So my Dad had privacy, although he was on the floor with his 8th-grade granddaughter now 40. They both had their own bathrooms. He became the center of

the family when he had been a distant removed father. His great-grandchildren my brother’s son Chris my grandchildren  Julia and Joseph and my children Jill and Kali adored him and he loved them. He was “ Pop”.

The VA GRECC program was superb.

I got him enrolled in the VA GRECC program in Menlo Park near us, and they took care of his heath for 20 years with the unmatched expertise that the VA is capable of bringing. I cannot say enough about what a great service GRECC rendered him. After 50 years of no help, they showered him with great preventative care, top-notch geriatricians, transportation, and financial support, and at the end home care until he died.

So on Veterans Dad, I would like to give you my own moving store and remind you of the horrible struggle veterans go through, especially PTSD Vets like my Dad,  salted by the 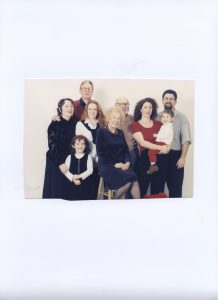 anguish visited on their families. But there is a great part of the VA and its GRECC. So happy Memorial Day Dad and so glad you moved in with us, died among his family, and was so well served by the VA GRECC PROGRAM