What is the Normal Family vs Dysfunctional? 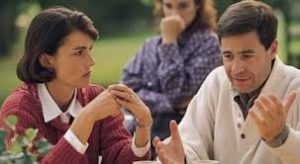 The normal family is the hand grenade compared to the nuclear bomb of the dysfunctional family. When both are faced with a filial crisis with an aging parent being dependent and the adult child needs to take over they cower or explode.

Dysfunctional families have many characteristics.

They lack the ability to resolve conflicts and have frequent psycho-social blockages that prevent the family from growing emotionally. They fail miserably at moving through all family stages and orchestrating family rituals. 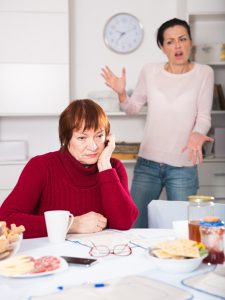 Most life transitions in the family, like birth, adolescence, and marriage have been very difficult to make, marked by a lack of support from the parents. Every holiday might have been drunkenly ruined. The parental figures are usually not in charge, nurturing, or able to establish establishes clear rules. They have never created an excel spreadsheet on tasks to do to orchestrate a holiday. Like a disease spreading down generations, they never knew how themselves, as their parents wrecked the holidays too.

Bad or just NO Family Leader

There are murky roles for everyone in the dysfunctional family with the chief role of the parent characterized by a lack of leadership of the family and the ability to nurture the children. Mom rarely became the high priestess on Hanukkah or Christmas, the family members generally do not believe the parent is there for them and can be depended upon. The dysfunctional family is colored by bloody strained relationships and unresolved conflicts and drunken ruined Christmas memories

is the inspiration for great literature. O’Neil’s wrenching plays A Long Day’s Journey into Night”

portrays the most miserable of dysfunctional families. Alcohol, secrets that have been kept by all for generations splatter the pages of this great play like it does in all the ruined holiday’s children of dysfunctional families recall with horror.  Prince of Tides a tale of a southern dysfunctional family gives us timelier glimpses of a family whose center can never hold together and whose blood oozes all over everyone from one generation to the next. Award-winning plays and films, like Tracey Letts August in Osage County about a ruined ritual funeral from hell when Julia Roberts tries to beat up drug-addled, drunk presiding mother Meryl Streep.

Burnt Latkes or the Christmas cookies-inflame the family

When Mom does not make the very small things she was able to pull off like the latkes or the Christmas cookies-  she always made every Hanukkah and Christmas, or burns them to a crisp- someone else has got to be the cook, and resentments skyrocket – tempers flare – and the torch just might never get passed.

Someone must take over the holiday rituals

The family is again thrown into crisis. That means someone must take over and the dysfunctional family has no model or spreadsheet to pull off the holidays while caring for a parent who did not care for them.